Tip: On your phone, download the app →Maps.me to navigate your way through any city.  It works offline, just download your maps prior when you have Wi-Fi!

To list everything important to visit while in Athens would be a very long project. Plus what is “important” to one person, might not be of high priority to the next. Athens has many revealed layers of history dating back to Ancient Greek and Roman times, all the way up to modern day history. You can walk anywhere in Athens and find exposed archaeology sites from sidewalk Roman Ruins to the Parthenon and everything in between.

To make life easier, I have listed popular archaeological and historical sites that I have recommended to others in the past. Since these sites are on the popular tourist routes, you can easily get to them by public transportation, Hop on Hop off Bus or any city tour.

Located strategically on top of a hill for all of Athens to see, The Acropolis is the largest of its type in all of Greece. Built and dedicated to Goddess Athena, there are various structures that make up The Acropolis- including the Odeon of Herodes Atticus and the Parthenon. Walking to The Acropolis and looking up at the columns of the Parthenon, one can appreciate the love and worship of the Ancient Greeks towards their Goddess Athena.

* Please wear sturdy shoes with good traction. The grounds of the Acropolis are marble and very slippery. I was walking very slowly around the Parthenon with my sandals as I had slipped a couple of times.

Dedicated to the head of Olympian Gods, Zeus, this once massive temple was considered the largest in Greece. It took over 600 years to complete, spanning into the 2nd Century BC, Roman Empire ‘Hadrian’s’ reign. Over the centuries, the Temple of Olympian Zeus, fell to ruins and was quarried for building materials. What remains today are sixteen of the original massive columns.

If walls could talk then there would be 3,000 years of stories within the district of Plaka! This neighborhood of Athens is considered the oldest, as it has been the longest running inhabited area of the city. It is believed to be the area that was developed from the ancient Agora of Athens.

Plaka is one of my favorite neighborhoods in Athens as it has so many layers. Yes, it is considered touristy with many souvenir stores, cafes and visitors but it is also filled with life. Plaka’s heart has been beating for thousands of years and it has that life energy of a city that keeps it alive. Throughout Athens evolution of different civilizations, eras and wars this neighborhood still remains strong and full of people. Plaka is a wonderful and safe section of the city to spend a day to shop, eat and people watch.

The archaeology museum in Athens is home to the largest collection of Ancient Greek masterpieces, artwork and sculptures in the world. If you plan on visiting only one museum in Greece, I recommend the National Archaeology Museum- the best of the best!

The National Gardens also known as the Old Royal Gardens, was completed in 1840 and commissioned by Queen Amalia in 1838. The gardens were opened to the public in the early 1920s and is a bit of serenity within the bustling city of Athens. The National Gardens is quite large and beautiful with shade, garden florals, duck ponds, playground, a café and ruins. It is open from sunrise to sunset, seven days a week. The National Gardens are located behind Syntagma Square, which is the main Metro stop coming from the airport. Please visit the National Gardens website for current information.

After the Greek Civilization came the Romans and they were everywhere. I have seen Roman ruins from Jordan (Middle East) all the way into Scotland! The Roman civilization was heavily influenced by the Greeks and you will see a similarity with their Gods, Goddesses, mythology, architecture, etc. The crossover between Greek, Hellenistic and Roman cultures became the Greco-Roman civilization. This is the reason that you will see a heavy Roman influence in Greece, especially in Athens. The Roman era is just another ancient civilization layer that Athens has to offer us as visitors.

You will find Roman ruins around many of the tourist areas such as Plaka, Syntagma the Acropolis, etc. Wherever you will find Ancient Greek ruins, more than likely you will find Roman ruins.  If you are wanting to indulge more into the Roman culture while in Athens, I suggest to do some research of famous Roman sights such as the Odeon of Herodes Atticus, Roman Baths, Hadrian’s gate- plus many more. Delegate a day, wear comfortable shoes and map out these sights. You will have a very filling day.

Parliament- Changing of the Guards

There are hourly changing of the guards in front of the Tomb of the Unknown Soldier at the Parliament, daily. The Evzones stand guard in a still fashion, then do a short performance when it comes time to change.

This historic and phenomenal stadium dates back to the 6th Century.  In later years,  it was reconstructed in full marble by Herodes Atticus, approximately 138 AD. A few centuries later, this glorious marble stadium was abandoned and was filled with a wheat filled. It was not until centuries later in the 1800s that this stadium was excavated after Greece won it’s independence.

The Panathenaic Stadium is one of Athens most treasured and visited sites. This is where modern day Olympics began in 1896 with fourteen competing countries! It is also the only stadium in the world that is made of full marble.

The Arch of Hadrian 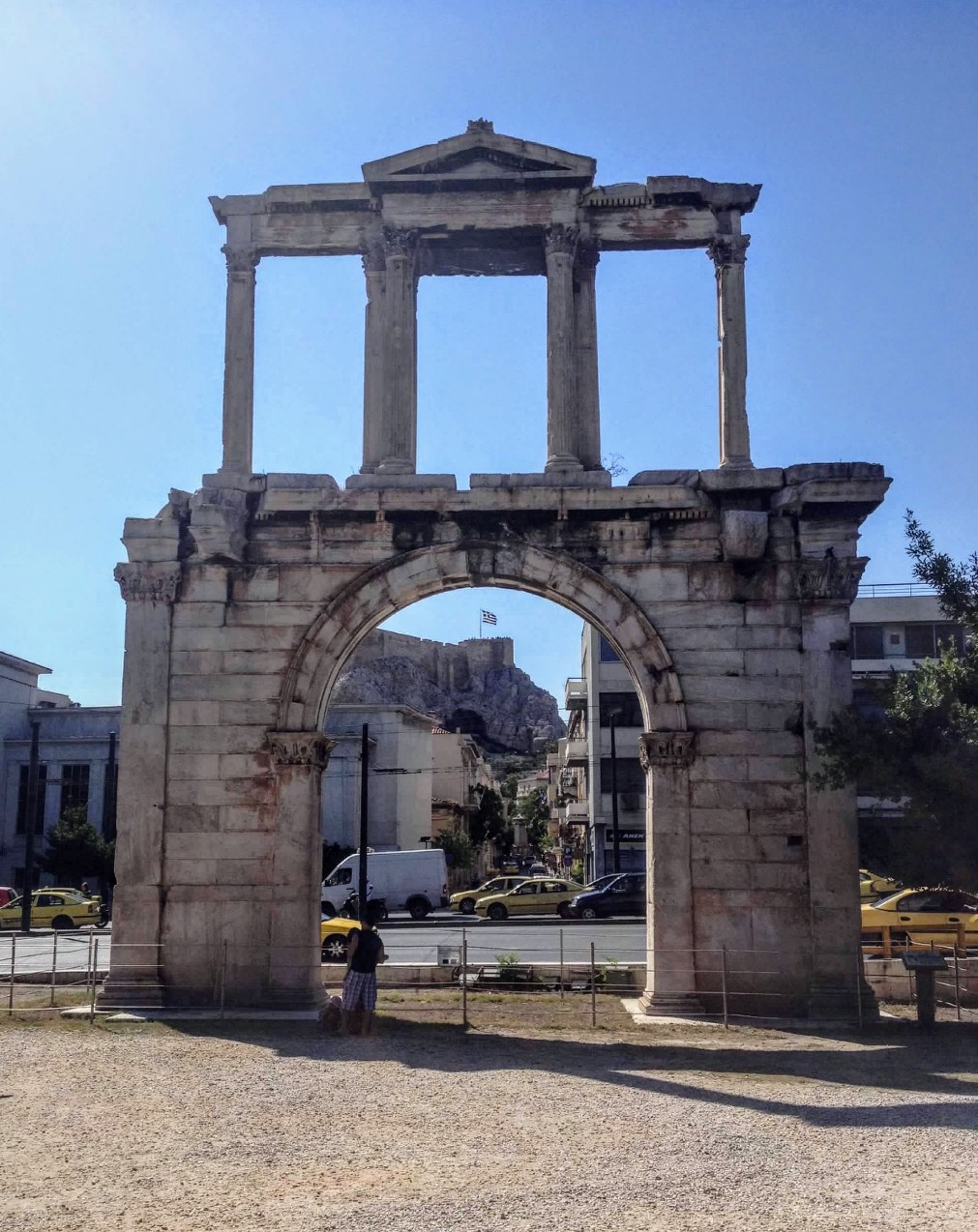 Hadrian’s Arch also known as Hadrian’s Gate was constructed during the Roman era to commemorate Emperor Hadrian’s arrival into Athens. The Arch of Hadrian is in remarkable condition considering that it was never fully buried (preserved) for over nineteen centuries. The location of the Arch is close to Syntagma Square and the Temple of Olympian Zeus.

🌎 Thank you for visiting my website and never stop exploring!

📸 All photos are taken by me, unless otherwise noted, and are my intellectual property

1 thought on “Archaeological and UNESCO Sites of Athens, Greece”